“Loving you is like Sherlock Holmes, a mystery every day…” sings vocalist Lance Doss, veteran of six
years on tour with Velvet Underground co-founder John Cale, sounding more like he spent that time
with J.J. Cale on this bluesy, powerful, definitive song about a mystery woman and the relationship’s
inevitable conclusion. The fluid melody, a second cousin to “Goin’ Down” – Down, Down, Down, Down,
bye, bye, bye, bye…good stuff. “Sadie” is a nice combo of 38 Special, Wet Willie, Mark Farner as
well as a strong dash of Ian Hunter’s “Once Bitten Twice Shy.” These fellows know their influences
and they wear them proudly on their sleeve here on their second disc, SGSB, the follow-up to the
group’s debut, The MalL Tease Fall Can.

At 5:15 “Divine” takes the listener on a slow journey, musically elegant with a superb vocal
reminiscent of Allman Brothers and Atlanta Rhythm section. Not to dwell on so many of the roots, but
it is hard not to hearing so many familiar riffs tweaked in clever and inviting ways. “Get It Back”
takes a different direction, both guitars churning soulful struts over the impeccable rhythms of
bassist Paul Page – also of John Cale’s band along with gigs for and with Dion, Popa Chubby, Ruth
Gerson, Martin’s Folly Gary US Bonds, Bo Diddley, Del Shannon, Ben E. King and resilient drummer
Steve Holley.

Where “Bama Bounce” pulls “Sunshine of Your Love” sideways, with a voice out of the clouds of
reservations from this country’s native American past, “Some Things Ain’t Never Gonna Change” is a
pure Hendrixian love fest. Go to the three minute mark and hear Jimi riffs and fills, with wah wah
and delightful drumming by Steve Holley as a sweet undercurrent.

“Payin’ The Price” could be The Beatles “Drive My Car” gone blues while “My Pride” takes Aerosmith’s
“Same Old Song and Dance” and brings it to the world of Savoy Brown and Foghat. Not that it is a
stretch, Ralph Mormon of Savoy Brown was lead singer for Joe Perry of Aerosmith’s first solo album
and this ensemble would be a perfect opener for “Smith any day of the week.

“Number” forges its own identity, multi instrumentalist / co-guitarist Justin Jordan bolstering the
song’s framework with intriguing patterns. “One Good Kiss” and “Consumer,” which concludes this
disc, speak with power and glory, it’s a blues buffet with touches of pop that has staying power and
an encyclopedic understanding of the genres it traverses. 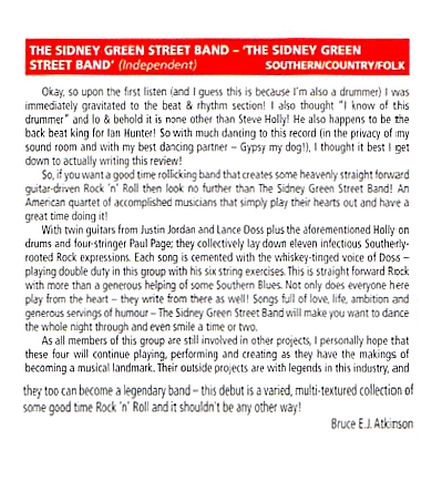 The Sidney Green Street band is promoted as a New Jersey bar band, but don’t let that description fool you into thinking they are amateurs – these guys are the real deal. But you do not have to travel to the Garden State to appreciate their brand of blues-rock, as they have recently issued their sophomore CD, SGSB. Though they have only put out two albums, this quartet has more than enough experience to get the job done no matter where they are playing. Lance Doss (guitar and vocals) toured the world for over six years with John Cale, and guitarist Justin Jordan has over 20 years of professional experience, touring and appearing with artists as diverse as Sean Fleming, Shirley Allston Reeves and Gary US Bonds. Bassist Paul Page toured with John Cale too, and appeared with some really cool acts including Dion, Popa Chubby, Gary US Bonds, Bo Diddley, Del Shannon and Ben E. King. And rounding out the group is drummer Steve Holley whose resume includes work with Paul McCartney, Joe Cocker, and Chuck Berry to name a few. The Sidney Green Street Band has a few things going for it that most North Jersey bar bands do not, and the first thing is original material: Lance wrote all eleven guitar-heavy tracks for this album. Another plus is a high level of musical ability, and the last piece is their take on Southern blues-rock. Apparently, Doss picked up a good dose of this from his home state of Alabama, but their vibe is still original with just a touch of Skynyrd here and there. The band took a chance by opening the set with a slow song, “Bye, Bye, Bye,” but this burning rocker paid off for them. Jordan and Doss’ smoking hot guitars are run in stereo and Lance knocks the vocals out with his diverse style, which can be described as a rough on one side and smooth on the other — kind of like a sheet of A-C plywood! This leads into the almost- pop “Sadie,” a play on the original Sadie Hawkins story as introduced in the Li’l Abner comic strip back in 1937 (in case you were wondering). This change of genres is not unusual for the Sidney Green Street Band. “Some Things Ain’t Never Gonna Change” is a soft rock tune, but with hard hitting rhythm guitar work over the awesome backline of Page and Holley. It has a few unique guitar breaks, including a standalone dry solo and a heavily processed Wah pedal solo. Also, the modern boogie of “Number” is a jaw-dropping bit of guitar fun. There are also a few standout tracks on the album that should be pointed out. The first is “Divine,” which has a catchy hook and an acoustic rock foundation. It shows mature songwriting, though it is uncertain if comparing your lady to a “good Southern Whiskey” will get you in her good graces. Doss’ voice is in fine form here with a surplus of emotion, and his harmonies with the other members are spot on. The other winner track is the country rocker, “Payin’ the Price” which is carried by its clever lyrics, an infectious rhythm guitar line, and some truly tasteful solo work. The album ends with a really cool tune, “Consumer,” which has a lot going on. The rhythm section builds a sweet Boz Scaggs riff on the bottom, there is a smoking twin guitar attack on top, and a fun vocal history cuts through the middle. This track would be a good set-closer, and that is exactly what the band does with it on this disc. The Sidney Green Street Band’s new album is a solid collection of original blues-rock with a Southern flavor. If you are a fan of heavy guitar blues with a killer beat this will be your cup of tea. And if you ever find yourself on US 46 between the Del Water Gap and NYC, make sure you stop in at the Great Neck Inn – they might just be on stage! Reviewer Rex Bartholomew is a Los Angeles-based writer and musician; his blog can be found at http://rexbass.blogspot.com

Jam band alert! Albeit a highly professional and well seasoned jam band. The members – Lance Doss (guitar & vocals), Justin Jordan (guitar and vocals), Paul Page (bass guitar), Steve Holley (drums) – have performed with the likes of John Cale, Flo & Eddie, Gary “US” Bonds, Dion, Popa Chubby, Kiki Dee, Joe Cocker and many, many more. In fact, Holley has been recording and touring with Ian Hunter for over 20 years and is still the drummer in Ian Hunter’s Rant Band. Now any band who names themselves after the bloke who played The Fat Man in The Maltese Falcon is off to a good start, but thankfully the music lives up to their billing. It is basically jam band material, but the good stuff. They’re bidding to be the 1971 Allman Brothers Band, not the 1991 .moe, something that caused a hefty sigh of relief round my way. They also make a few nods towards the psychedelic side of things, without tipping over into self-indulgence. They also don’t forget that you need to have a tune, and there are plenty of good ones including ‘Payin’ The Price’ and ‘Get It Back’, which are well worth spinning more than once.